Thanks. How do I check if it's still active?
Top

shaklee3 wrote:Thanks. How do I check if it's still active?

The telco Network Interface Demarc (NID) is probably located on the outside of your home. That is where the local phone company's equipment ends and your's begins. Usually there is an easily accessable customer side that can be opened with a standard screwdriver. Inside you will likely see one or more modular phone jacks with short phone cords plugged into them if Comcast did not unplug them when they installed CDV. If they are still plugged in, simply unplug them - the cord (male) plug is your side of the interface and the female jack is the phone company's side. I'd advise tagging the cords with a note not to plug them in or damage to customer equipment may result.

Some of the NID's are a bit different than what I described, so if you're not sure what to do when you open it just let us know. We've some former telco employees here (like southsound) that can give you specifics if needed.
Top

fingal wrote:
Right now my main (office) number is assigned to the Hub and the second (home) number is assigned to the Scout, so I assume I need to call Ooma Support and get the phone numbers switched. Then I should be able to wire it as you describe.
You can modify my directions slightly without making the change with customer service (except as noted in my last sentence at the bottom of this post). Instead of splitting the phone port on the Hub, use the splitter on the Scout's phone port with one side feeding the jack for your home and the other side to your office phone line 1 or line 2 input. The phone port on the Hub would be un-split and go directly to the other line input on your office phone. Be aware that a number of folks have noticed a hum on the outbound call side of the Scout (heard by the other party) so you will need to ask if others can hear a hum on Scout connected calls, YMMV.

fingal wrote:
I do want to have a voicemail interface on the kitchen phone also. How would I add in the second Scout to do that? Do I have Ooma Support set the second Scout up?
In this case you will need to also split the wall port on the Hub and connect one side to the Scout wall port in your office and the other side can be fed through the same jack as you're feeding from the Scout's phone port by means of yet another splitter, and at the other end you would connect the other Scout's wall port to the jack and then the kitchen phone to that Scout's phone port. That Scout would be sharing the the same line as the office phone (Hub) since it is a shared device, so if you still want the Hub line to only ring in the office you will need to follow my original instructions after having Customer Service switch the numbers.

Groundhound, I think I've pretty much followed your instructions but am hung up on correctly supporting a second scout in the kitchen so the phone there can review messages. See my attached diagram for what I have now. The home and office numbers work just fine in the office. You were talking about an additional splitter or two. Could you elaborate based on what I have? 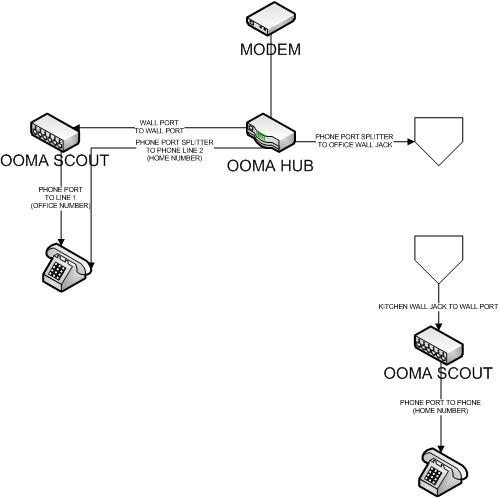 Ok, based on Groundhound's and Murphy's replies, I hope I've interpreted you both correctly. Have a look. And would voice mail for both numbers come through to the kitchen scout or just the home number voicemail (which is all I need there)?

This is a great forum, by the way. 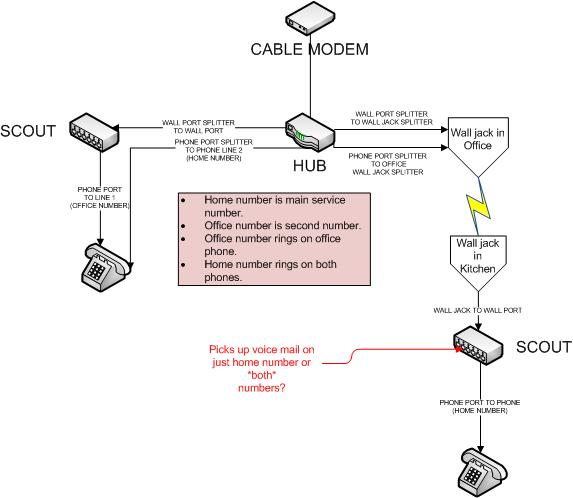 Since the Scout in the kitchen is a shared device, it would only access voice mail from the shared (home) number, just like the Hub.
Top

I set up the configuration as displayed in my previous post, minus the wall jacks. It all works great -- woohoo! As Groundhound said, the kitchen Scout only accesses voice mail for the home number. I'm ready to disconnect my landlines and start using my wall jacks.

Thanks all. Couldn't have done it without the experts.
Top

Glad you have it working!
Top
Post Reply
18 posts