by worksong
lbmofo: In don’t know who you are, what you do, how you have time to write 3,000 posts on a forum about a particular telephonic device, or why you’re so quick to jump to the company’s defense that some might question your motivation & credibility.

I do know that you’re behaving like a reporter who arrives at a crash site & begins combing through the wreckage looking for clues to what happened...without bothering to question the eyewitnesses who were present & saw the entire incident.


I spoke to Ooma personnel before purchasing my 1st Telo. They confirmed that if I wanted to receive email notification that included an attached file with the incoming message, I would have to purchase Premier service. If I opted not to upgrade, I would receive only an email stating that a message had been received.

I bought the Telo, did not upgrade, & received such notifications with each message for 1½ years...until this week.

A few months in, I bought a 2nd Telo, did not upgrade to Premier, & also received email notification of inbound messages, until this week.

Apparently, mydanilo had the identical experience with his Telo.

We each asked Ooma—before we purchased—about the inclusion of basic notification, received affirmative responses, bought the product, & enjoyed this service for an extended period until it was abruptly cut off without notice. Why you refuse to accept this is a mystery.


Instead of continuing to speculate, why not either wait for Ooma to respond to my direct query, or ask the question yourself?

by EA PA
Not to nose in here, but I see VM Notifcations being included in Core and Premier in accordance with

EA PA wrote:Not to nose in here, but I see VM Notifcations being included in Core and Premier in accordance with

Basic (Non Core devices):
http://ooma.custhelp.com/app/answers/de ... on%20basic
Note: the description has a typo; instead of saying Basic, it says Core but the table's heading is correctly marked with Basic.

by lbmofo
worksong, I am just a guy who really likes the Ooma product(s). From what I've seen, Ooma is extremely upright and has never short changed their customers. Hence anytime someone suggests otherwise, I do my part to defend this admirable company.

I don't doubt that the voicemail notification has been working for you up until recently. Like I said, this situation has been true with other features as well, such as mp3 attachments in vm notifications, network outage call forwarding etc., and are attributed to a "bug" (proper downgrade does not take place for some base service customers after Premier trial expires).

A family member activated a Hub (not Core) early last year and when his Premier expired, unlike Core base service Voicemail Preferences, the Forwarding and Notifications section wasn't visible to him anymore hence he no longer could provision that piece. If my assumptions are correct, you probably never looked to see whether you could still provision your notification after your Premier expired correct? It just kept working with whatever you setup during Premier trial. https://my.ooma.com/voicemail

It is unfortunate but customer service can sometimes and do provide misinformation.

Ooma mods monitor threads here all the time; so do a lot of frequent posters. Maybe they'll provide input as they see fit.

EA PA wrote:AH - sorry - I though Core was the basic plan

EA PA, LOL, all opinions and participants are welcome!

You asked a very good question re: my accessing services after the Premier trial expired, but your assumption is not correct in my case. On my 1st Telo, I most definitely accessed message notification preferences after I was downgraded from the Premier trial. On my 2nd Telo, I opted out of Premier within a week after purchase, as I knew I would not subscribe on that line. I changed notification settings after this point.

I think the "Feature Comparison" table which you [& EA PA] posted tells the story, & I've att'd a snapshot from that. Ooma said today that their Core service was discontinued in April '10. [That this table & other non-current info is still on their website is odd...]

My Telos were purchased prior, meaning the Core services shown were included when I bought my systems. The table clearly shows that Core includes notifications, but you must buy Premier to get forwarding/attachments. I think this is consistent with what mydanilo & I were told pre-purchase.

When I buy a subscription service with a periodic fee--like Premier--I understand that there may be changes from time to time in either the price, what that service includes, or both.

I didn't buy a subscription service, however. I bought a piece of hardware, on the promise that: a] it would perform certain functions, & b] that I wouldn't have to pay another nickel, ever, except for the actual FCC fee [then $12 annually].

Ooma is not entitled to unilaterally remove services from customers' wholly-owned devices & tell them that if they want those capabilities restored, they'll have to pay a new, recurring fee.

Whether the company just changed policy & discontinued the notification service this week, or planned to discontinue it last April & "forgot" is completely immaterial.

When Ooma promoted "no fees, ever" to original purchasers, then decided to pass along the annual FCC fee, they properly exempted everyone who bought their devices while the "no fees" policy was in place. If they're going to abandon that approach, it will mean they might, on a whim, take away any feature, from anyone, at anytime, regardless of any commitment the company made previously.

I still haven't heard back from Ooma, but I sincerely hope this "take-away" theory proves false. They impressed me as a more honorable firm than to do that...

by worksong
Here's the reply from Ooma:

"I will forward your concern to our product and marketing team who are always eager to hear good suggestions from Ooma users like you that might be implemented in the near future."

They're not yet listening, & have no idea how much noise I'm prepared to make.

I'm willing to go another few rounds 1st, & have sent this:

Had I bought an Ooma product yesterday, then requested the addition of another service or feature to the included package, your response would be entirely appropriate.

That’s NOT what happened, & you have NOT responded to my question.

I’ve owned two Ooma Telos, & have used them for over a year. A service that was advertised as included when I purchased the product, & which was provided continuously since purchase, is now gone.

I want to know: A] when this service was removed or turned off; B] when & how this change was announced; C] how you justify taking away service from those who purchased prior to your policy change.

Please escalate this request to someone capable of providing substantive answers.

by darin_n
I have been an Ooma customer for over a year and have had either text message or e-mail notification of new messages (without voicemail attachements) until roughly a week ago. I too am frustrated this feature has been removed from the basic
Ooma subscription.

worksong wrote: I want to know: A] when this service was removed or turned off;

There was a bug in our system that inadvertently left voicemail notifications on for some Basic users after their 60+day Premier Trial downgrade. The feature was turned off for these Basic users a couple weeks ago.


worksong wrote: B] when & how this change was announced;

The change wasn't announced since only a small subset of Basic users were affected. We likely should've done better at notifying users that the feature was turned off.


worksong wrote: C] how you justify taking away service from those who purchased prior to your policy change.

Voicemail notifications have always been advertised and messaged as a Core/Premier feature. For example, if you logged into My Ooma as a Basic user and navigated to Preferences->Voicemail, you would see something similar to the below screenshot. 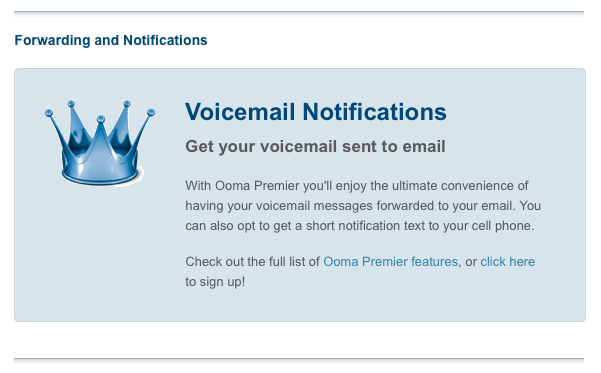