Got something else to discuss that is not covered by the previous forums? Post it here!
Post Reply
26 posts

So Ooma confirmed via implication that the USB connection is the issue via an email this morning that says they are sending another adapter for the netstick. I am not confident this will make a difference as I previously mentioned that I already tried several adapters, and no adapter with the netstick and did the hotglueing hack with the adapter it came with, and all worked fined with my PC (prevented usb disconnects), but made no difference when plugged into the Ooma Telo. Maybe I just have to wait longer... like more than the 15 minutes I waited each time I tested with the Telo?

the picture of the elbow joint adapter they allegedly are sending: 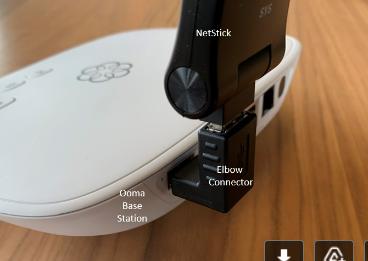 As mentioned, I tried just plugging the NetStick directly into the Ooma to see if the cable length was an issue, but it didn't make a difference, so I don't know why a little adapter would make any difference except to that this new little adapter firmly grips the port of the netstick for reliable usb connection... lets hope this works for people, so they don't have to get out the hot glue gun.
Last edited by twofingerrightclick on Sun Jun 26, 2022 11:49 am, edited 4 times in total.
Top

I'm curious -- did they send you this as an individual email, or as part of a mass email to all affected customers? Because I responded to the questionnaire indicating that my device was not working, and I did not receive an email (or any other notification from Ooma.)
Top

Strangely the email was sent from a customer rep, and had another customer rep CC'ed. So not from a noreply like customersupport.noreply@ooma.com , but an actual reps work email. Maybe they are addressing customers 1 by 1, once they have the adapter ordered for the customer...
Top

My adapter showed up this morning, in an Amazon envelope, but delivered by USPS. There are TWO of the little adapters. No explanation or instructions, and I still have not received an email. If it hadn't been for this forum, I wouldn't have even known why I received this.
Top

I got the two pack 90 degree USB-A adapters yesterday. The Netstick will face backwards when it's installed- not an elegant solution but it does seem to work properly now. The Telo is in a low visibility location anyway.

It would seem the desktop stand that comes with the Netstick doesn't pass sufficient voltage from the Telo- this adapter shortens the cable run. Netstick is a little more power hungry than the original adapter tower, probably due to the greater number of LTE bands required on TMo.

If you install the adapter and your Netstick still won't give you a stable connection you might have to swap out the Telo with a new unit.
Top

Signed my parents up 9-months ago. Sprint has been out of business since April/May 2020. There were two (2) models of this device that worked by using a cellular device to connect the Ooma to the Internet. One device was being discounted and was available as a fire sale by many re-sellers for approximately $50. I was told after trying to save a few bucks that I could buy the cheaper one, but the device that I needed to connect to the cellular towers in my area was an old Sprint only device, and I would not be able to activate any service without buying a new antenna device from Ooma.

So the device I ordered in September 2021 was called Telo 4G and I understood this Telo device contained the latest and greatest cellular antenna device to connect to the towers in my area. Regular price on this was $129.99 and my Mom received a discount for signing up for a year of service which brought the device to $99 -- double the price of the original device being discounted all over the Internet -- but would work straight out of the box with no issues.

It worked briefly and tested OK, but I get a phone call this morning from my Mom's cell phone, and she is claiming the service is not working. WT...? Now I am understanding they are malfunctioning because of a USB power issue -- which means no one tested a dern thing -- before they put the problem out to their customers to deal with. These people must not understand the rates I charge for technical support is pretty steep!

The replacement was rushed, is made too cheaply, BLACK (will burn up and malfunction in a window that get's sun), the cable is not adequately long enough at 29.5 inches -- I am missing about 12-13 feet of cable to put this back the way I had it installed! It also arrived looking like the contractors that put the sim cards in -- did not know what they were doing! The sim tray was all bent up and the sim card was not even making contact! So I had to bend the tray back and shape and properly install the sim card at STEP 1 -- just to get a little farther into this problem.

As everyone else has stated, this replacement is not going to work. The work arounds with using adaptors and removing any/all cables is not going to work! My Telo 4G was placed on a table not far from a window. I had to take advantage of the 15-foot cable and place the antenna in the window and had to make all of this look "pretty". Also, all of this equipment was WHITE -- and they have sent replacement parts that are BLACK? I don't think so!
I am sure my parents Ooma will not work and get a good signal with having to place the new antenna directly on the Telo, so the service will not be what they have paid for -- this is a bait and switch.

I will have to make FCC complaints and threaten a lawsuit I suppose -- as I will only be seeking a full refund of all equipment and services of the last 9 months as a punishment -- to these folks who dropped the ball and have placed customers in this debacle. I also have a 25 year old phone number associated with this -- that if lost -- they will be sued out of business.

I am heading back over to hook the old WHITE cellular device back up -- Ooma had better be glad I did not drop this old device off in the UPS drop box -- on my way home from an unexpected service call -- to replace their equipment for them. But I am unsure how this is going to solve anything. According to all of their last minute notices and even US mail -- the end date for these devices is June 30 -- and unless they are sending similar equipment as a replacement -- there are going to be problems past June 30.

No service/equipment as paid for = angry customers! (and third parties)

Take my advice and NEVER pay these people who drop the ball and wait until the last minute to address major issues -- for any services up front!

I am at a loss as to why this has to be so difficult -- why is it that everything is so screw-up with any business today? -- something so simple as a sim/device swap should not be so botched. People act like we just started provisioning cellular services yesterday when we all know -- it is a matter of knowing what you are doing or not -- with so many who do not. There was no testing and no quality control.

I was going to buy one for myself and am glad I did not now. They also have marked the price up too high for the equipment now -- as they retail for $179.99 ($180) -- with no way to order one at this time -- I guess due to this debacle. Not being able to depend on the cellular connection to keep working when these companies sell out -- is what makes this a bad decision we made -- when ordering in September 2021. One hand never knows what they other is doing in these corporate mergers like Sprint / T-Mobile!
Last edited by DisasterRecovery on Fri Jun 24, 2022 8:06 pm, edited 1 time in total.
Top

I would advise anyone that has plugged this into a laptop as mentioned and showing the speed test results -- NOT TO DO IT!!!

Unless you have pre-paid for that data -- my understanding of the fine print of using "their" Internet -- is it will be on your next credit card bill statement... I fear a case of billing shock may set in!!!

It is like 8.99 just to get data turned on the Telo per month and only provides 1GB of data -- there are other price points -- but nothing unlimited -- all with overage charges -- all very expensive options for Internet.

This data option would probably be useless to depend on in an emergency situation -- when towers most often overload from everyone's smart phones and hotspots -- when their cable or fiber lines goes down for whatever reasons -- power outages, line cuts, etc. LOL

I would assume "voice" traffic get's priority in this situation since it is meant mainly as a home phone replacement.
Top

So I see 1 for the tiny elbow adapter helping the usb connection, and 1 for no. I havent had the chance yet to try the adapter. Lets comment yes for adapter works or no. And maybe a couple sentences about what you observe when it's not working.
@DisasterRecovery thanks in advance for making formal complaints on our behalf. let us know if you have success with the new modem.
Top
Post Reply
26 posts

Return to “Other Support Topics”